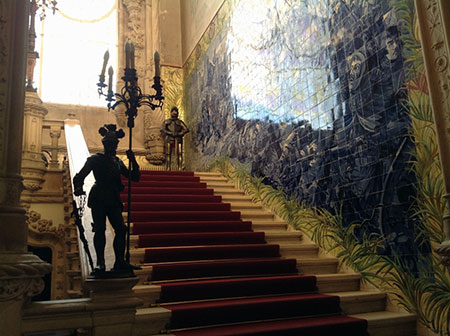 I want to share a hidden gem of a Palace Hotel with you. I stayed in the Bussaco Palace Hotel about 20 years ago escorting a Rotary Club International Pre convention group, and swore I’d return with my husband Dick. This fairy tale castle is located in an enchanted forest full of Sequoia size Red Wood Trees and a mountain studded with Stations of the Cross.

Portugal’s last King built it back in 1885 as his hunting lodge and it is one of the most beautiful and historical hotels of the world. Now, I know, what you are thinking, I bet this place costs a fortune? Right? Well, I was surprised as you will be when I reserved it for about $180 usd a night!

Its located about 2 and a half hours north east of Lisbon and one hour south of Portugal’s second largest city, Oporto, famous for its port wine. More on that later.

We decided to drive around northern Portugal for three days prior to embarking on one of the world’s finest 6 star cruise ships, the CRYSTAL SYMPHONY where we are hosting the Virtuoso group onboard. We are sailing from Lisbon to Dover, England and calling on Bilbao, Spain where we visited one of Spain’s finest wineries, the DINASTIA VIVANCO, in the Rioja Wine Region of northern Basque Spain. It has a world class wine museum, probably the best in the world.

We took off in our rental car, with Dick as the fearless chauffeur and me as the navigator. As you know, Portugal is one of Europe’s smallest countries, and always has been one of its least expensive to visit. I’m happy to tell you, IT STILL IS! You can actually have a $10 lunch as we did overlooking the beautiful Douro River in Oporto. We were enchanted with this Unesco World Heritage City and loved watching kids swimming in its very clean water. There are more and more European River Cruise Lines like VIKING RIVER CRUISES offering one week cruises which cruise along this waterway including visits to Salamanca, Spain. A great two week vacation could include several nights at “my Bussaco Palace Hotel” and pre and post cruise visits to the nearby historic cities of Coimbra, a university town where we got boxed into a dead end pedestrian square full of side walk cafes! I was sooo embarrassed with all these people watching us turn our car around surrounded by sidewalk cafes and returning back up the one way alley (where no cars were allowed in the first place, much to our surprise). The Catholic Shrine of Fatima is within an hour drive as well as Obidos. We also visited Sintra with its 3 royal palaces, and I’d recommend overnighting in Cascais, a beautiful resort just outside Lisbon on the Atlantic coast where we stayed before embarking on the Symphony. Another lesson we learned: BE SURE TO CHECK YOUR CRUISE LINE’S WEBSITE A DAY PRIOR TO EMBARKATION FOR THE LATEST PIER ON WHICH YOU WILL BE BOARDING. We had quite a taxi “tour of Lisbon” chasing up and down the miles of piers, looking for our ship. The taxi driver insisted it was (according to the address on our ticket) what we knew was the wrong pier and we kept telling him it’s not those ships! Fortunately we had seen it earlier as we drove in and knew it was just past the big bridge. A word to the wise is sufficient!!

After boarding the CRYSTAL SYMPHONY, here are a few comments on our itinerary:

BORDEAUX WAS A REAL SURPRISE, I had been there 10 years ago while hosting a horseback riding tour of the surrounding Wine Chateaux (Sip and Giddy-Up) visiting St-Emilion, Pomerol, Medoc, among others and was UNDERwhelmed with the city. Well, you should see this 2000 year old city now! She is absolutely spectacular in many ways, similar to Paris with its Notre Dame look alike Cathedral of St-Andre. It’s a true destination for a week, especially if you are a wino-like me! It’s one of the best walking cities in Europe with myriads of historic squares full of antiquities or churches. We sailed up and down the beautiful Gironde River, past huge wine estates, a great experience in itself.

Another surprise was St. Peter Port, capitol city of the Island of Guernsey in the English Channel Islands. We took the one and a half hour, 2 L- (pound) circle bus trip around this charming English Island. There is a world class Museum in the Castle Cornet which will take you the rest of the day to do justice to and a German Occupation Museum among others, very charming indeed.

We also called at St-Malo, a walled city on the English Channel which was 80% destroyed during the bombings of WW 11 and has been perfectly restored to its 17th and 18th century splendor. The best way to see this unbelievably charming town from yesteryear is to stroll along its ramparts where you can get a 360 degree view away from the summer hordes. It’s also a port to visit Mont St Michele, the iconic coastal monastery and Dinan and Dinard medieval villages.

Next stop is HONFLEUR, NORMANDY, situated at the mouth of the River Seine, not far from Le Havre and Deauville and the LANDING BEACHES of WW 11. I think this medieval town with its half timbered 15th century buildings surrounding a harbor filled with fishing boats was our favorite. It didn’t help that there was a huge Saturday Market where I actually got some French bargains, two pairs of wrinkle free capris WITH POCKETS, a rarity, as you ladies know, for an incredible 15 euros, and made in France! Not China! We took the Petit Train, the little circle electric train tour around and up the hills overlooking the harbor, and loved it for only 6 euros. We have decided that we love ‘DOING OUR OWN THING’ in the ports that you can walk around near the ship. They all provide a shuttle if you are a little distance from the port, then you can get local bus tickets to nearby towns as well as the local hop on and hop off bus tour. We did this in Bordeaux with great success and almost every port like St Malo and Honfleur operate these Petite Train Tours. When you want to see surrounding towns and attractions, like the LANDING BEACHES, or Rouen and Giverny that’s another story, and you need to book the ships shore excursions, which in the case of the 1944 invasion is an ABSOLUTE MUST, they are celebrating their 70th anniversary, June 6th, 2014!

This cruise was our third on CRYSTAL, and it’s easy to see why they have been voted Best Large Cruise Line by Conde Nast readers many years in a row. I personally love their University at Sea, where I took IPAD CLASSES, got lots of help from Jesse their Internet Manager. Both of us really enjoyed getting the inside dope on the last 9 US Presidents from White House Correspondent, Tom DeFrank who knew all of them as he flew on Airforce One. CRYSTAL certainly lives up to their reputation for having some of the very best entertainment at sea. They now are including all tips and wine and adult beverages on all voyages. Their staff is just about the friendliest we’ve ever seen. We can strongly recommend this cruise company.

We hope you were able to glean some insight into these travel destinations, I can be reached on my cell phone as always at 513 200 5488 with any comments or questions and will be back in the States, September 5th after visiting some of the Stately Homes and Gardens of S. England