Our one week cruise exceeded our expectations. Since we have been on over 15 River Cruises throughout the Eastern US and most rivers in Europe, you could say we are true River Rovers, as there is always something to see out your window except when you are in a lock! This “Lewis and Clark” Themed Cruise was full of the most spectacular scenery, along the Columbia Gorge, full of waterfalls on the excursions, Wine Tastings in Washington’s Red Mt Wine area; the Hop On and Hop Off Buses travel right along with the boat, meeting us at every port and taking us to absolutely excellent museums like Ft Clatsop where Lewis and Clark spend their winter overlooking the Pacific, the Reach in Richland, Wa. which not only gave us all the history and Indian Lore but also the story of nearby Hanford which hosted the MANHATTAN PROJECT. The Federal Gov. built a town of about 25,000 occupants in one year to house its employees who were producing the plutonium for the first Atom Bomb which was dropped on Japan in Aug. of ’45 to end WW2; 99% of the employees had no idea what they were working on!

The food was as good as any 5 star cruise line and the nightly entertainment, was off the charts, with only 2 couples who had more talent than 10 people combined. The Riverlorian- lecturer Mary is from Cincinnati and lives in Madeira of all places (where our kids and grandkids live). She was a wealth of interesting information. Some of the passengers took the HELLS CANYON Jetboat excursion down the deepest gorge in the USA and said it was the highlight of their week. We’d already been on the Rogue River Jet-boat trip and opted for the Nez Perce Indian Monument trip. Most of the cabins on the Empress had verandas and I’d recommend the E category if you want to keep the price down, because it also has a balcony, it’s cozy but very comfortable. The B and A Category are very spacious and opulent. 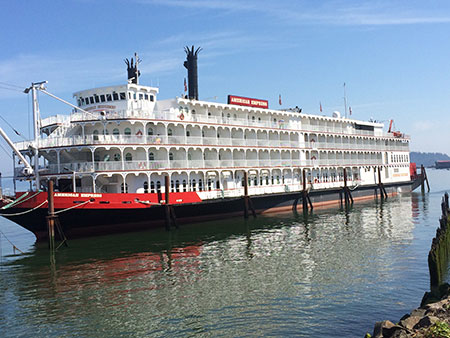 We headed north out of Lewiston and arrived in several hours at the absolutely pristine lakeside town of Coeur D’Alene, Idaho passing hundreds of miles of bright yellow White Wheat Fields, which had just been harvested and bound for China and Asia to make Asian Noodles. Our luxurious hotel that night was the Coeur D’Alene Spa and Golf Resort, and it topped my expectations again. It sits like a crown jewel on the Lake by the same name, surrounded by a huge Marina, where they will take you for a complimentary boat ride on a vintage Cris Craft Woodie, across the lake to visit the gorgeous Championship Golf Course with its floating 14th hole. You have to drive over (I’d say at least 150 yds) and then take a boat over to put the green if you were lucky enough to reach it! We opted for a lunch/dinner extravaganza buffet and walked off this feast by a hike along the side of the lake and swim in the indoor pool. Oh the life! 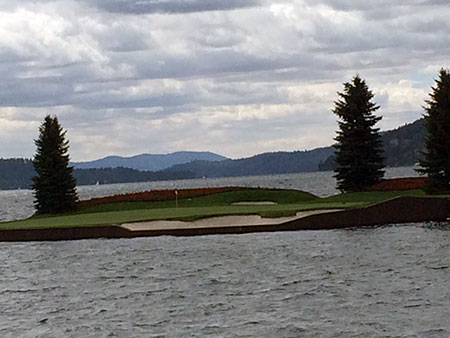 We departed early for our next stop BIG FORK, MONTANA passing some pretty great mountain scenery. This just got us warmed up for the main event, GLACIER NATIONAL PARK. We booked into the Bridge Street Cottage in the Historic Town, which has a well known Theatre which operates all season. It’s located very close to Flat Head Lake, the largest freshwater lake west of the Mississippi, I am told. 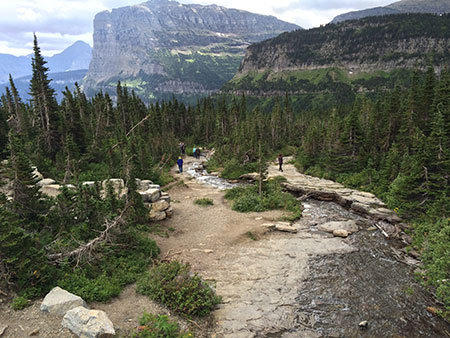 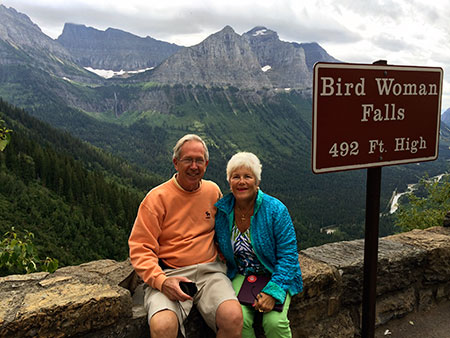 I have been trying to get to GLACIER NATIONAL PARK ever since I worked as a waitress back in ’63 at the Old Faithful Inn where I had the time of my life, or at least one of the best times of my life! Dick and I have been trying to visit all of the big National Parks and nothing has exceeded Yellowstone for me, (although I loved Bryce and Zion especially, when we took a Tauck Canyonlands Tour two years ago). GLACIER NATIONAL PARK TOPS THEM ALL FOR PURE MAJESTIC MOUNTAIN SCENERY!!! AWSOME AND HUNDREDS OF W O W S don’t do it justice! We drove the 50 mile ROAD TO THE SUN, a National and World Heritage Site which every Red Blooded American should experience. I jumped out of our car at least 20 times to take pictures that are good enough to frame and put on our walls, they are so spectacular! We stayed at MANY GLACIERS LODGE, soon to celebrate its 100th Anniversary. It’s kept its historic atmosphere. One of the highlights of our stay was a Cinnamon Bear and her two black cubs crossing the creek right in front of us! Ask me to show you my pictures, priceless! I strongly recommend visiting this International Peace Park which is connected to WATERTON LAKES NATIONAL PARK in Alberta Canada the next few years as they predict that the glaciers will be all melted in the next decade or so. We were planning on driving over the Canadian Border to visit Waterton and taking the lake cruise, but the first rain in 21 days squashed that. We headed west out of the park and stayed in WHITEFISH, MONTANA, home of BIG MOUNTAIN SKI RESORT, and a true gem of a resort town. The mountain looked extremely challenging, past my 2 double hip replacements capabilities!

OVERALL DICK AND I FEEL THIS EXPLORATION OF THE PACIFIC NORTHWEST IS ONE OF THE TOP TRIPS OF OUR LIVES, AND WE HAVE TAKEN QUITE A FEW!

I HOPE THIS REPORT WILL HELP MOST OF YOU TO BE ABLE TO EXPERIENCE “GODS COUNTRY’ SOMETIME IN YOUR FUTURE!